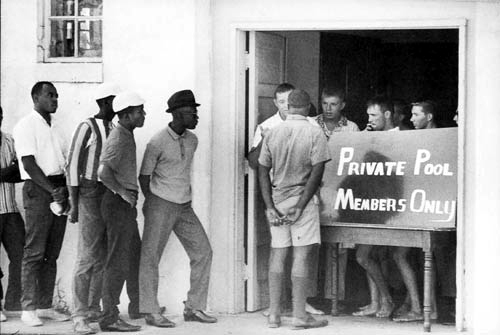 “It’s $30 dollars a month,” my Mama said to my Daddy. We knew she thought the pool membership costs too much. We pulled at Daddy’s work shirt, with his name stitched on the pocket and drenched with his sweat from the Georgia heat and humidity, begging, “Please.” We wanted to join the pool for the summer in the small rural town to which we’d recently moved. Our new neighbors were going and so were most of our friends from school who lived in town. Our country friends worked on their farms and couldn’t. The coolness they experienced was from a hose fastened to a spigot piped to a well. “We’ll see,” Daddy said, shooing us to the den, where we watched the TV that picked up three channels if the antenna was straight and where we breathed bleach fumes from my Mama’s having scrubbed mildew from baseboards.

The next morning, Mama gave me an envelope. “Don’t you lose it. You give this to Ms. Wilma Jean. It’s the signed application and check.” The screen door slammed as we took off through the yard to the road on our bikes. Mama wouldn’t see us again until supper. My sister had the pimento cheese sandwiches in a paper sack, and when we arrived and laid our bikes on the grass next to others, Ms. Wilma Jean handed me a key and put the bag in a locker. She looked over the paperwork and gave us a nod. “No running,” she yelled after us.

The water was cold. We got it in our ears, we swallowed it periodically, and people splashed us in our eyes by cupping hands and spraying or by jumping in and doing cannon balls or belly flops. Teenage girls sprawled on beach towels on a cement patio near the deep end and guys stood huddled by a tree gawking, flexing muscles, and talking and laughing. Once that first week, the pool got cleared because of a suspected turd that turned out to be a Baby Ruth dropped in as a joke.

By the end of summer, we were tanned and our black hair was lighter. We didn’t want summer to end, but the next spring, we were excited about the pool until we learned it would not open. After school got out, we rode bikes and stood by the fence and watched a bulldozer fill it in. Our Daddy told us, “They don’t want everyone coming, so they’d rather close it altogether.” We found other things to do in summer, and it would be years before we learned a local group had protested to the international charitable organization that owned the pool that it was unfair to sell memberships to whites only.

Niles Reddick’s collection Road Kill Art and Other Oddities was a finalist for an Eppie award; his novel Lead Me Home was a national finalist for a ForeWord Award. His work has appeared in the anthologies Southern Voices in Every Direction, Unusual Circumstances, and Getting Old and has been featured in many journals including The Arkansas Review: a Journal of Delta Studies, Southern Reader, Like the Dew, The Dead Mule School of Southern Literature, The Pomanok Review, Corner Club Press, Slice of Life, Faircloth Review, and many others. He works for the University of Memphis at Lambuth in Jackson, Tennessee. His new novel, Drifting Too Tar From the Shore, is forthcoming in 2016. His website is http://www.nilesreddick.com.

Return to Table of Contents